Everything You Need To Know About WordPress 4.5

Everything You Need To Know About WordPress 4.5

Less than a week left till the target date for the official release of WordPress 4.5 that is scheduled for Tuesday, April 12. Contributing developer, Mike Schroder is the release lead and core committer at the team. He is being assisted by two other release deputies, Mel Choyce, and Adam Silverstein. There are some 49 new changes that were made since the first developer release of Beta 4.5 in February 24, 2016. I will concentrate on possible new additions that will be handy for users on a day-to-day basis.

So what’s new in WordPress 4.5? These are the major points that captured my eye when testing the Beta version ahead of release.

With the goal to add a user-friendly way to preview ones website’s theme responsiveness in the customizer, new version of WordPress will include new icons on front end. By clicking on “desktop, tablet and mobile” icons appearing at the left bottom side of the screen users will be able to to emulate different device sizes. The page will resize on a live mode without changing the size of your browser window. It is the same trick as you’d normally will perform a mouse hover when decreasing the window size manually. 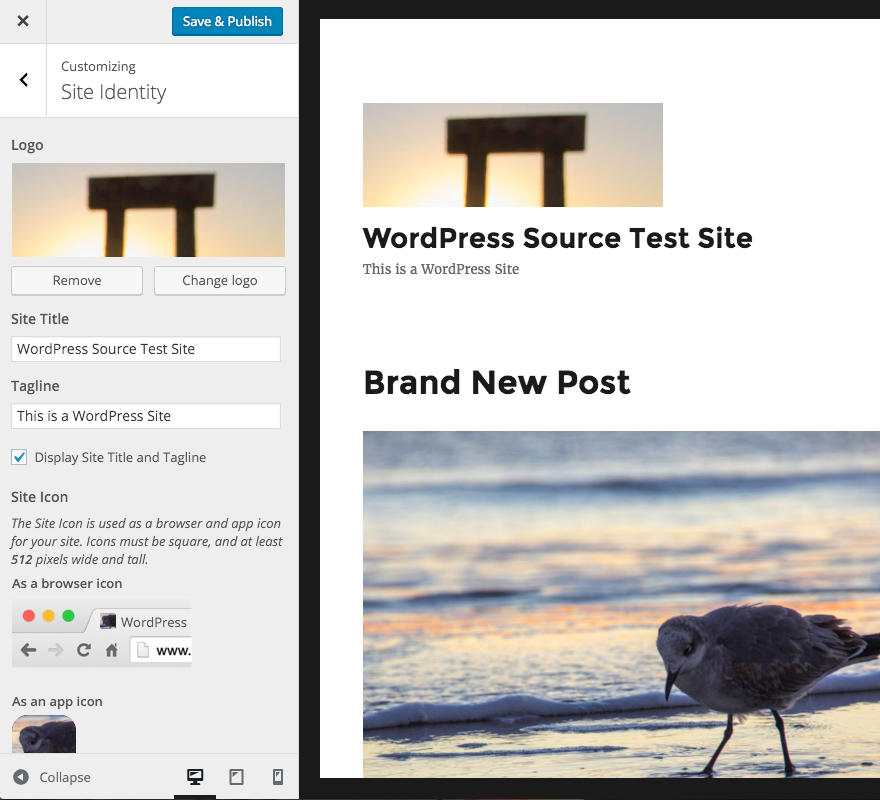 The second valuable feature that comes in the new version is theme logo support. Normally some WordPress themes would include couple of basic options for a logo or header image, but with WordPress 4.5 users will have a chance to add logo using wordpress standard functionality.

“Site Identity” menu that is included in theme customizer, besides setting up site title and tagline and site icon (used to be called “favicon”) users now able to add a new logo image.

The major benefit of this new feature that I like the most is that it will obviously prevent poor display of logos that looked good on one theme, but whose size is not appropriate for another theme’s declared size. The good thing about this addition is that the logo will not be lost when switching between WordPress themes. 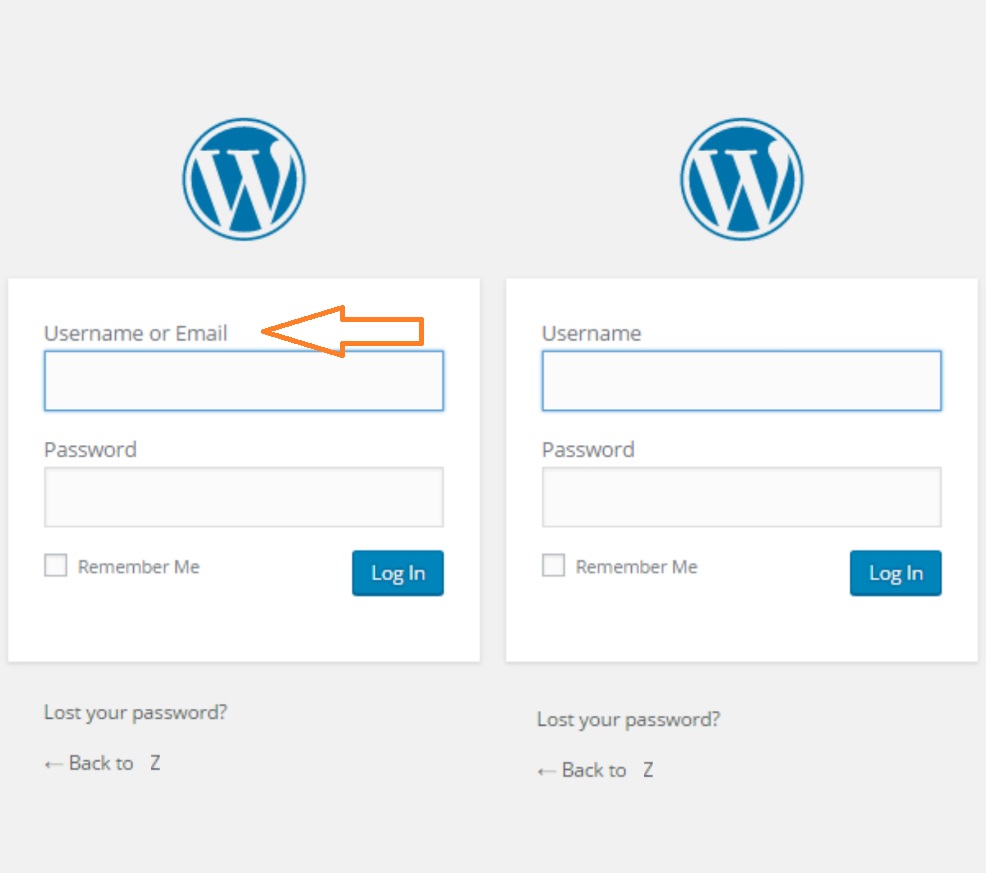 In order to avoid duplicate usernames at all costs long anticipated allowance to use email address for logging in will become available. This of course has the other benefit , that a lot of users will not need to save extra lines , but just use their email address when logging in to the admin panel. Another benefit is that a lot of users with memberships, multiple admins or e-commerce applications will be able easily to navigate between users. 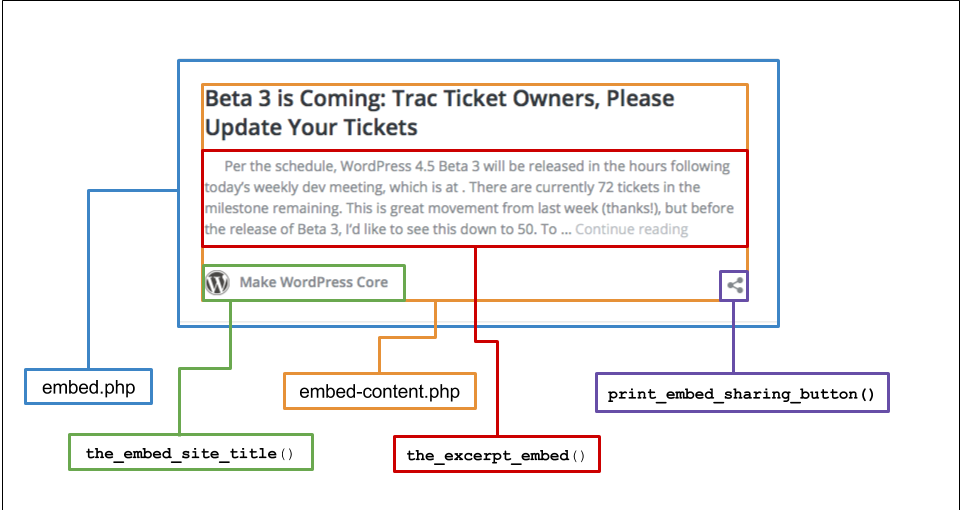 In WordPress 4.4 WordPress introduced embeds which was giving users ability to embed posts from their own and other WordPress blogs. With the newly developed code and further adjustments in WordPress 4.5 embed templates will become more customizable and robust. Many bloggers and daily web geeks can’t hide their enthusiasm regarding this new significant embed code adjustment. Besides adjusting and fixing some bugs in embed.php the overall embed template had been customized in embed-content.php, the_embed_site_title(), print_embed_sharing_button(), the_excerpt_embed(), the_embed_site_title (). This templates allows custom look for views of single embed of different formats.

Some other major fixes include further improvements of optimized image size generator. Since version 4.4, users on smaller screens were able to experience more user friendly interface and navigate through smaller images that were appropriated for their screen. With the new version of 4.5 core developers improved this function and made a reduction of image size up to 50% without any visible quality loss.

WordPress 4.5 also includes several old bug fixes and a couple enhancements in for the Comments section. Comment moderation action becomes more easy and simple. Rachel Baker who has accomplished 25 tickets in order to moderate comments in 4.5 included the following benefits and new features:

Future updates of WordPress and their new version will fully include REST API that had been delayed up until WordPress 4.7 (The REST API was supposed to be included in WordPress 4.4, but was included partially). WordPress core developer and WP REST API maintainer explained: “We believe endpoints for the main WordPress objects (posts, users, comments, terms, and taxonomies) are not enough to garner the support needed for the proposal to be accepted.”

Our hope is that with a stable version 2.0 release [of the WP REST API plugin], we will attract our community members that have been waiting for the endpoints to be available in core, and submit a merge proposal for the WordPress 4.7 release cycle,” Mr. McCue added.

Until then, developers can still use the REST API in its current form, delivered as a plugin.

The community works hard to develop and bring the best experience for users. From the first days of announcement of WordPress 4.5 overall 372 bugs have been marked as fixed in WordPress 4.5. The new version obviously will bring more smooth, user-friendly and fast experience.